This is a great place for recipes to try, to read my blogs about life, see me progress with my photography and find out what my next project to help others is. Becky Lipp is ALL about love, a place of positivity, reflection and beauty. Thanks for taking the time to join me. 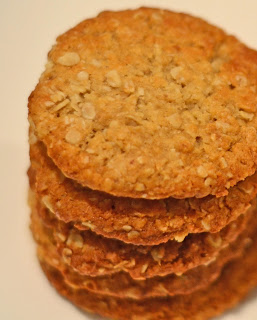 Baking is my way of releasing stress...I just love it!  I wouldn't say I was a great baker but I do ok and my baking gets eaten.  Nobody has taught me to bake, I just learn as I go.

I had tried to make Anzac cookies the other week at the request of my hubby.  The first batch were a disaster, but I didn't give up.  I tried a new recipe...better, but not great.  So this is when I decided to just change the recipe a bit and ta-da!  Yummy cookies that are crunchie on the outside and soft and chewy in the middle.

Here is my recipe for you all :

Heat oven to 180 degrees. Line two baking trays with baking paper.
Place flour, caster sugar, coconut and oats in a bowl and stir to combine, leaving a well in the centre.
Melt butter and golden syrup in the microwave or stove.
Dissolve baking soda into boiling water.
Add melted butter and syrup as well as the boiling water and baking soda into the dry ingredients.  Mix to combine.
Roll about one tablespoon of mixture into a ball and then squash between your hands.  Place onto baking paper leaving room for biscuits to spread while cooking.
Bake for about 10 minutes OR until golden brown.  I like to undercook slightly so the biscuits are still a bit soft in the middle when you take them out of the oven.  Simply change the cooking time to suit your desired result.  Remove to a wire rack to cool.

The great thing about Anzac biscuits is they last for up to a week in a airtight container and are super quick and easy to make!
Posted by Becky Lipp at 01:38

Becky Lipp
I am a mother to two beautiful boys. I feel priviledged to have them in my life. They make me see the beauty that is all around. I am currently doing a diploma in photography and with that I want to share the beauty I see through images with you all.